Part 1: From Seattle to Idaho

This post comes to you from a vacation rental in Page, AZ.

Idaho, there is not much to say. Really.- CeG <oBelIX>

I do not mean any offence to the state, I am sure it is very beautiful. Unfortunately, owing to a shift in timezones and a little oversleeping I ended up leaving Twin Falls at 10:40 in the morning after picking up a footlong at a subway and filling up with gas. It was a memorable morning but that is perhaps for some other time. The 10:40 departure worried me because I had originally thought I’d leave at 9 in the morning. US-93 had very little traffic. It seemed mostly agricultural in Idaho and there was really not much to say to it. The narrator was getting into the topic of Phaedrus, introducing him so to speak and I listened to Zen for many hours.

Nevada is nice to drive in. –CeG <oBelIX>

Fear not, I will give specifics. The city of Jackpot lies on the border of Nevada and Idaho and US-93 gets interesting just after. It goes through a series of hills and by now the land is covered in scrub and sagebrush. It is arid now, but a different kind of arid from Ellensburg. The dry hills of Eastern Washington are more rocky, they have more grit, substance, a feeling of power to them. The word in Hindi, which would convey this is chattan. The arid hills in Nevada, while covered with scrubbery (yes, I’m continuing to use this word so that it gets imbibed into the con) seem very weak. Eroded. Sandy. They land is also flatter so after climbing a hill I could see where the road goes for many miles. There was also very little traffic on US-93 which surprised me. I expected it to be packed and the going to be slow. The going was in fact slow, based on the average speeds I maintained through Nevada in th elater part of the day.

Towns here are found only where there is water. The city of Wells is founded next to a hill which I presume is high enough to cause the rain carrying clouds (where on Earth do these come from?) to shed water. There was not much more of interest on US-93 except that I was now doing far above the recommended speed limit. I had a companion as well, a Honda Accord from Greenlake. He followed me for many miles, glad he had someone ahead of him who was going.

I also learnt something rather interesting about Highway Patrol. While cruising at a nice rate of speed I happened to spot a highway patrol car in front and put the car in sixth and settled down at a nice 70 miles per hour an acceptable distance behind him. The radar detector was silent as a, well, umm, I have nothing to complete that simile. When a car would come by in the opposite direction the radar detector would go berserk, beeping and telling me there is something ahead to be careful of. I conclude that highway patrol is clever, they do not keep their radar on all the time when they are cruising, preferring instead to turn it on when needed. This led me to alter my driving style to slowing down to a sensible 5-10 over the speed limit when an oncoming car was approaching and speeding up after identifying it. This worked well in Nevada, Utah and Arizona, on state highways, because of the lack of traffic.

This was one of those pieces of road that put a smile on my face. Right after Ely, the road towards the Great Basin National Park goes through this forest. The forest exists on a set of hills. There is a road through these hills. This road is amazing.

If you go to Las Vegas and do not go to this national park then you are missing out. –CeG <oBelIX>

A sealed packet of Cheetos can explode if you change elevation fast enough. –CeG <oBelIX>

There was a volcano in the middle of what is now Nevada. This volcano, which is now known as Wheeler’s Peak stands 10,000 feet in the middle of the desert. While this in itself is not very large (re: Everest) it is tall enough to completely alter the geography of the surrounding areas. Great Basin National Park, a national park that had very few visitors so close to the Labour Day weekend. There are two primary attractions:

I did not do the caves (see above: I was late). I did drive up to Wheeler Peak. It is a 12 mile one-way drive and took about 20-30 minutes. I was going at a sensible pace, nothing like Hurricane Ridge, mostly because the road is untrustworthy. It is neither well banked nor smooth. There is no shoulder, there are just a few shrubs, a very pretty green, between you and a very airbag-explosion-inducing-mountain-side-should-you-go-over. The views are decent, not epic. The interesting thing to keep an eye out for is the change in flora. At the desert floor it is all sagebrush. As I went higher, it gave way to plants that required more water. Trees. Really verdant trees. It was remarkable. The exhibit at the visitor center mentioned that every thousand feet in elevation provides the same vegetation as a 600 mile increase in distance towards the pole (goop: horrible, I need a word for that). 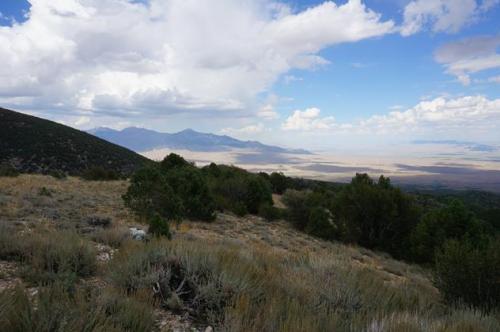 I had a grandstand view at lunchtime!

The road from GBNP back to US-93 is, umm, empty. It is also banked very well. It also has nice sweeping curves. It allows you many moments of pure exhilaration. These moments are derived simply from the drive, the scenery, while not bad is not remarkable in any way.

US-93 on the other hand, after Majors and till Pioche, is a beautiful drive. The open space in the desert makes me nervous. Wary is the right word. I do not feel that way driving through the greenery in the Pacific Northwest. The desert commands respect because it is so open and so vast and because it shows you its vastness. The last time I drove through Nevada and Arizona I did not feel this. I presume it was because I had the company of three other gentlemen. This time, alone, with a narrator that was talking about Emmanuel Kant and his Critique of Pure Reason I was very aware.

At some point, I noticed a thunderstorm on the horizon, due south. US-93 heads due South. It is interesting to look at rain from far away, it looks like sheets of water, localized. The thunderstorm decided to plomp itself right on US-93 and unleash its full fury upon me. There was lightning and I recalled a Physics teacher telling me, you can’t get struck by lightning inside a metal shell. I do not remember why. I was relieved. The rain was, well, typhoonous? Hurricanous? It was slapping the windshield. I opened the window and put a hand outside and the force of the raindrops stung. It was a nerve-wracking twenty minutes, spent driving at 40 miles an hour. Unforgettable. 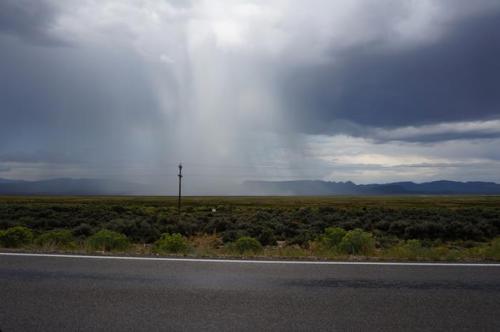 Gives a whole new meaning to the phrase, localized showers 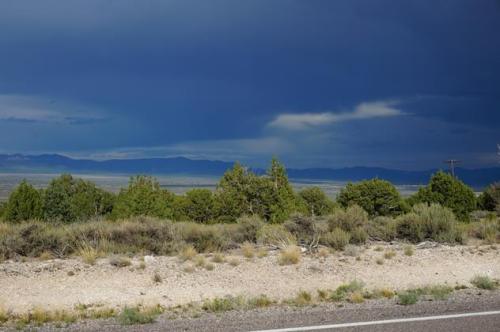 A great road is when you want to turn down the music and listen to the car. –CeG <oBelIX>

From US-93 till the Utah border. Just, well, drive it and you will know.

Not really. I lied. I did not go to Zion. However, at 8PM when an exit on I-15 says “Kolba Canyon, Zion National Park” and the words Scenic Drive below it there was no way I was not taking that exit. Especially since the tearing through Nevada and Utah had caused me to gain quite a bit of time. Things to note:

By now, I was sufficiently tired for the day. The remainder involved a drive, just getting from point A (ZNP) to point B (Page). The radar detector saved me in a town called Federnio or something like that, a sheriff sitting with the lights out. I think I drove over some very beautiful scenery on US-89 A and but it was too dark to make out what was going on.