oBelIX in Ottawa – I

This post comes to you from a fairly comfortable, inexpensive room, ten minutes away from downtown Ottawa. I happen to be here because of a rather important need to get a visa renewed. I will not deliberate on the ridiculousness of this ridonculous requirement (yet another
example of how to improperly break up the flow of a sentence). Anyway, since I am here, for a good long time, I will chit-chat, write about Ottawa.

Part I: United and Chicago

I flew United airlines once again, not out of choice or desire, but more because this-is-the-cheapest-flight. I slept soundly through the first flight out of Seattle which left at the ungodly hour of 6AM. I woke up only twice through the entire flight, and both times it was because the dude in the seat next to me had to pee. Anyway, I landed at Chicago airport, around lunchtime, hungry and decaffienated. There was a Starbucks so I popped over and picked up one of their sandwiches. The lady, broad and of a very southern accent said, “Those are 9 dollars.” I looked down at the sandwich in my hand, it was two slices of bread with some turkey and cheese and lettuce and tomato and onion. Nine dollars, I thought to myself. I got the coffee and mosey-ed over to “Johnny Rockets” fast food where I promptly got a far more affordable and value for money meal.

Part 2: The US Embassy in Ottawa or Applying for a US visa in Ottawa

This part is actually useful information so readers looking for bc/timepass should skip this section. Anyway, the important things to keep in mind for the US Embassy in Ottawa are:

Just to make sure that this is not a totally useful section, I will add this rather interesting piece of trivia that the consular officer told me: “Ottawa is the second coldest capital in the world”

I like Ottawa. I like most places where walking is easy and encouraged. Ottawa seems to be such a city. It is small. It is well-defined. I understand how it is laid out. It takes about five kilometers of walking to understand a neighbourhood and by now, I’ve walked around far more than that – I count approximately sixteen kilometers. My fairly comfortable, inexpensive room is in the city of Gatineau, about a kilometer and a river away from Ottawa itself. Crossing this river puts me in Byward Market, an upscale set of restaurants, bars and shops which I shall investigate over the course of the next few weeks. Past the market the neighbourhood grows a touch less posh. There are homeless gentlemen, one of whom was very convinced I was from Russia and kept asking me for change or whether I wanted some Vodka.

I had dinner at an Ethiopian restaurant called “The horn of Africa.” It was a shabby run-down place and I walked three kilometers to get there. Upon entering, I was greeted by the glummest gent on the planet. He led me, dourly, to a table and got me a menu. I asked for the Shiro Wot which was not available. I asked for the Kik Wot. I asked for it spicy. It came, arranged rather unflatteringly on three injeras that did not really feel like they wanted to be eaten. It took me ten minutes to get through the food which I attribute to me being cold and hungry and not to the quality of the food. Tl;dr: Do not go to the horn of Africa for Ethiopian food. Tomorrow, I plan to try out one of the cheap shawarma restaurants: Shawarma King or Castle Shawarma. There is also a Café India King which sounds interesting and a pub called that offers Husband Daycare!

The weather in Ottawa is cold, hovering around 5 degrees Celsius in the day and 0 at night. The cold is tolerable, it is the wind that is a bitch. Suffice to say, my current pair of gloves will not cut it and I am very glad I got my Russian cap and overcoat along.

The parliament atop its hill

Alternately Titled: Please excuse the trees in the bottom left 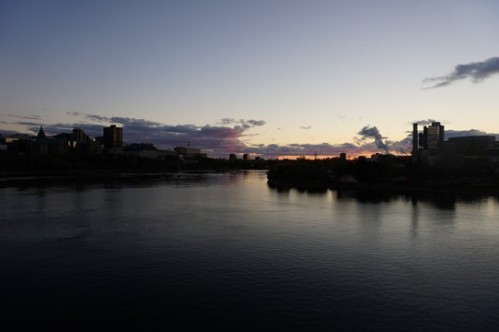 Sunset on the river

Alternately Titled: I should have left fifteen minutes earlier 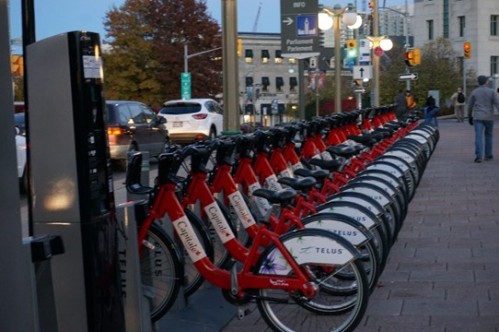 Alternately Titled: Stand farther back when you take a picture you idiot

Alternately Titled: You should have cropped out that tree